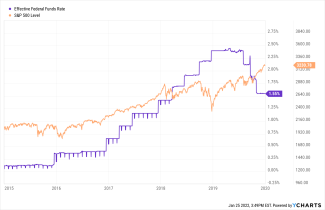 In late 2021 when market commentators were looking into 2022, they were predicting it would be a volatile year. Well, a few weeks into January and we're already seeing some volatility. To put this in perspective, here are some of the major US stock market indexes and the drawdowns we've seen so far this year. 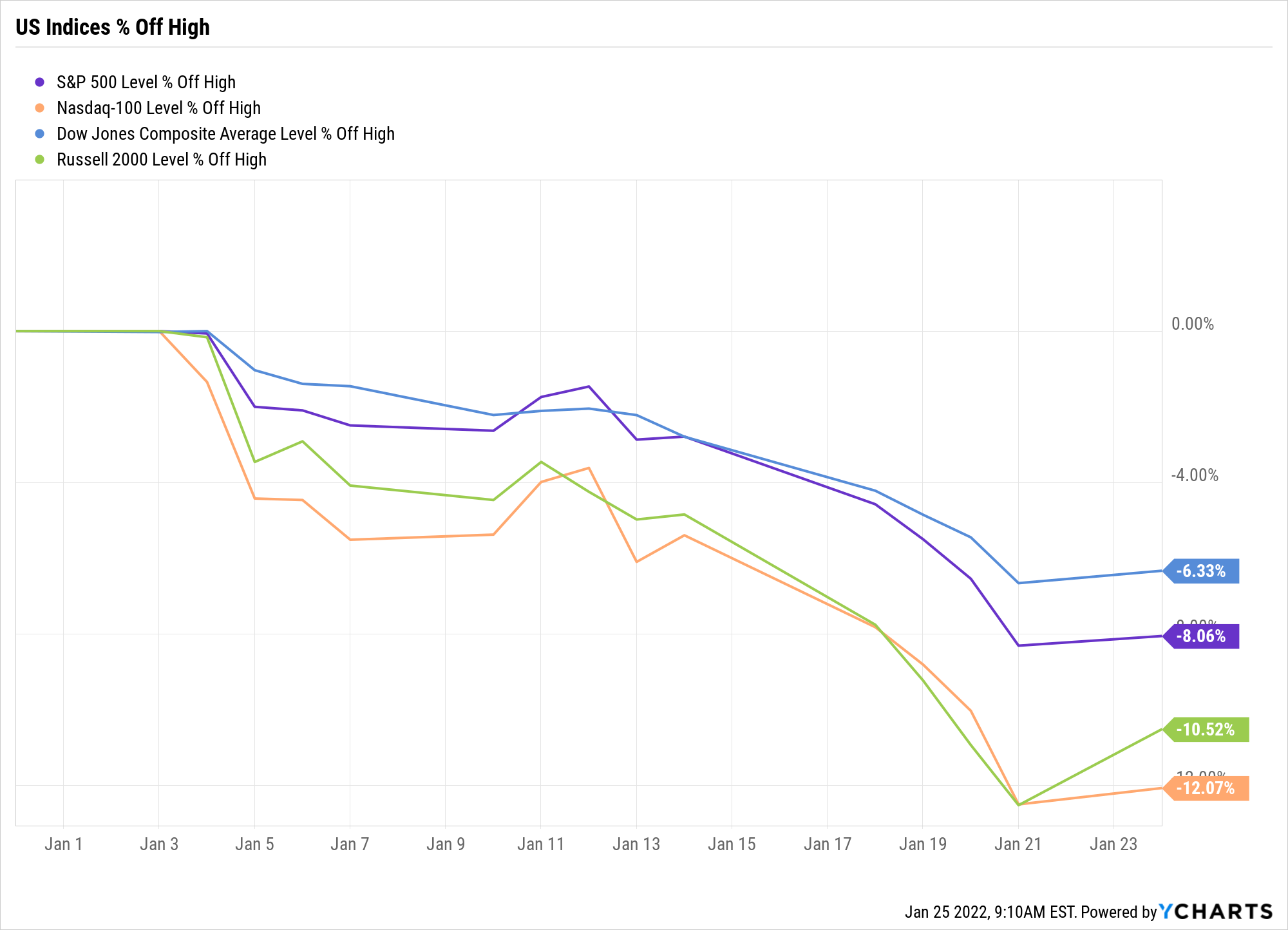 Faring the worst, the Nasdaq is down over 12% from it's highs since the start of the year. It appears to be consensus that the central banks tightening monetary policy has sparked the recent sell off. In plain language, what this means is that central banks have projected interest rate hikes this year. Higher interest rates means a higher discount rate when modelling cash flows, which tends to hurt sectors such as technology. With certain technology companies, they might not be projected profitable until a number of years in the future, and a higher interest rate means those discounted cash flows from the future are less valuable.

Why Are Central Banks Raising Rates?

Central banks have taken this monetary policy stance as a measure to reduce inflation in the economy. We've seen some of the highest inflation numbers over the last 30 years, and central banks (and citizens) want it reduced.

Up until recently, central banks have been talking about inflation as being transitory. I think the case for transitory inflation is understandable. The economy was shut down and money was transferred to citizens via direct bank transfer. Inflation measures a year over year increase in goods and services, and when comparing 2020 to 2021, I can see how there is more demand for products and services in 2021 when economies reopened. 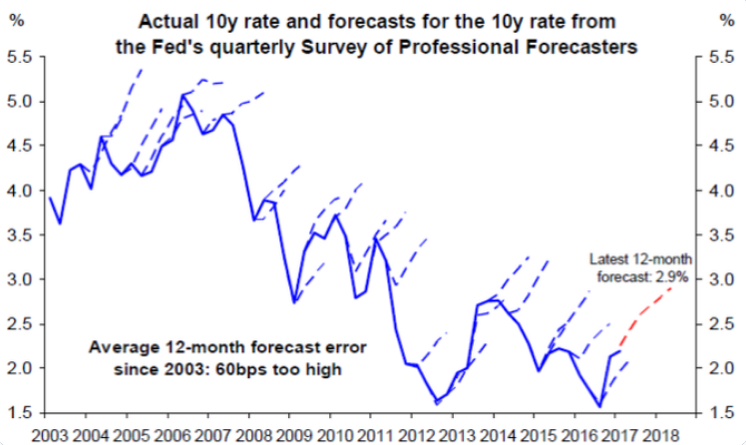 Throughout the last 20 years, analysts have consistently forecasted higher and higher yields on the 10yr US treasury.  Maybe they have been right three times out of the last twenty predictions. So, while the analysts are currently pricing in four rate hikes this year, history would show that they tend to overestimate.

Looking back at a longer trend, we can see the following of US 10yr Treasury yields: 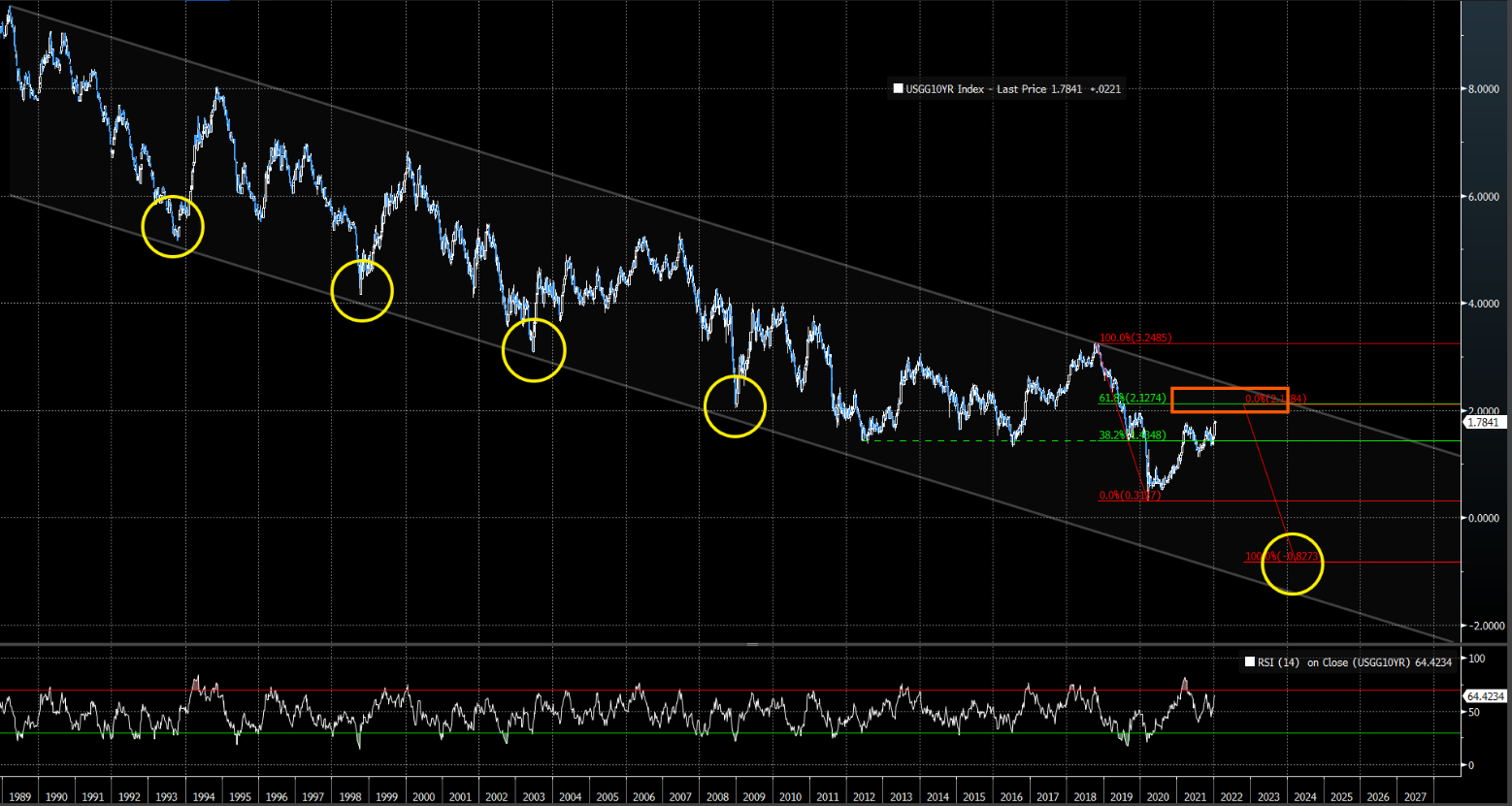 We have been in a secular decline of interest rates for the last 30 years and remain range bound. Sure, we've been through cyclical periods of rising interest rates, but they have always been short lived and resumed a downward trend. Structural trends such as demographics (slowing birth rates) and technology (automation of jobs) has kept inflation low. The chart shows we may hit a shorter term cyclical high in interest rates, but shows the longer term trend of yields going lower. (Far right yellow circle)

Bond investors have always been classified as the smartest guys in the room, yet long term bond yields have barely moved. If bond investors were worried about longer term structural inflation, you would see long duration bond yields rising much more than they have. The spread between the 30yr and 10yr US Treasury rate stands at 0.32%. Hardly the premium you would expect for owning a 30yr bond if inflation was a major concern. See below. 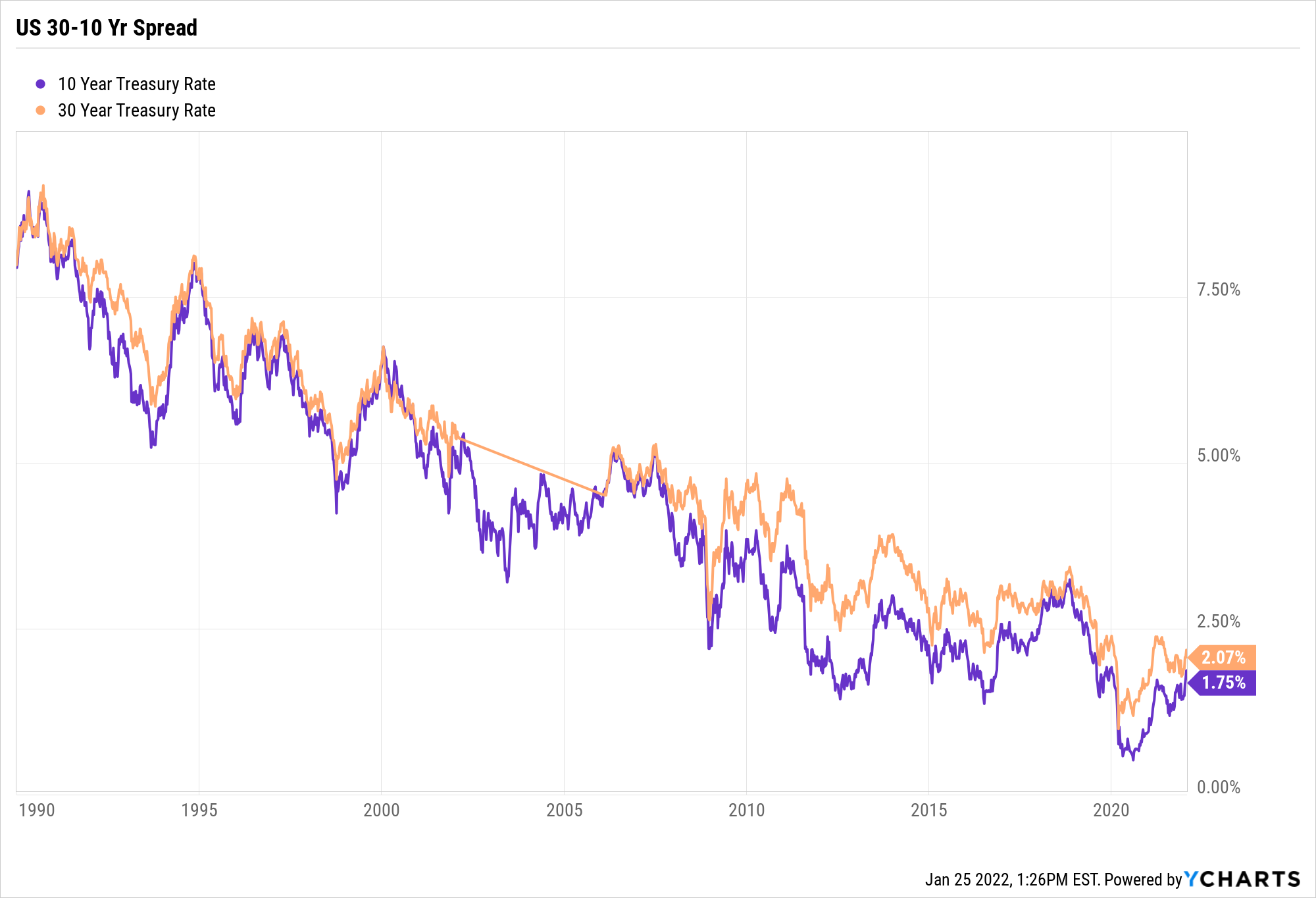 This information would suggest that inflation isn't expected to be as high going forward, and certain economic data has been suggesting the same.

What Does This Mean?

Central banks are in a tight spot. The last rate hike cycle began in December 2015. They started off slow.. one hike in 2015, one hike in 2016, three hikes in 2017. For the most part, stocks moved up as interest rates went up. Higher rates means solid economic growth, and the stocks followed. In 2018, after the Fed raised rates four times the market broke down in late 2018. 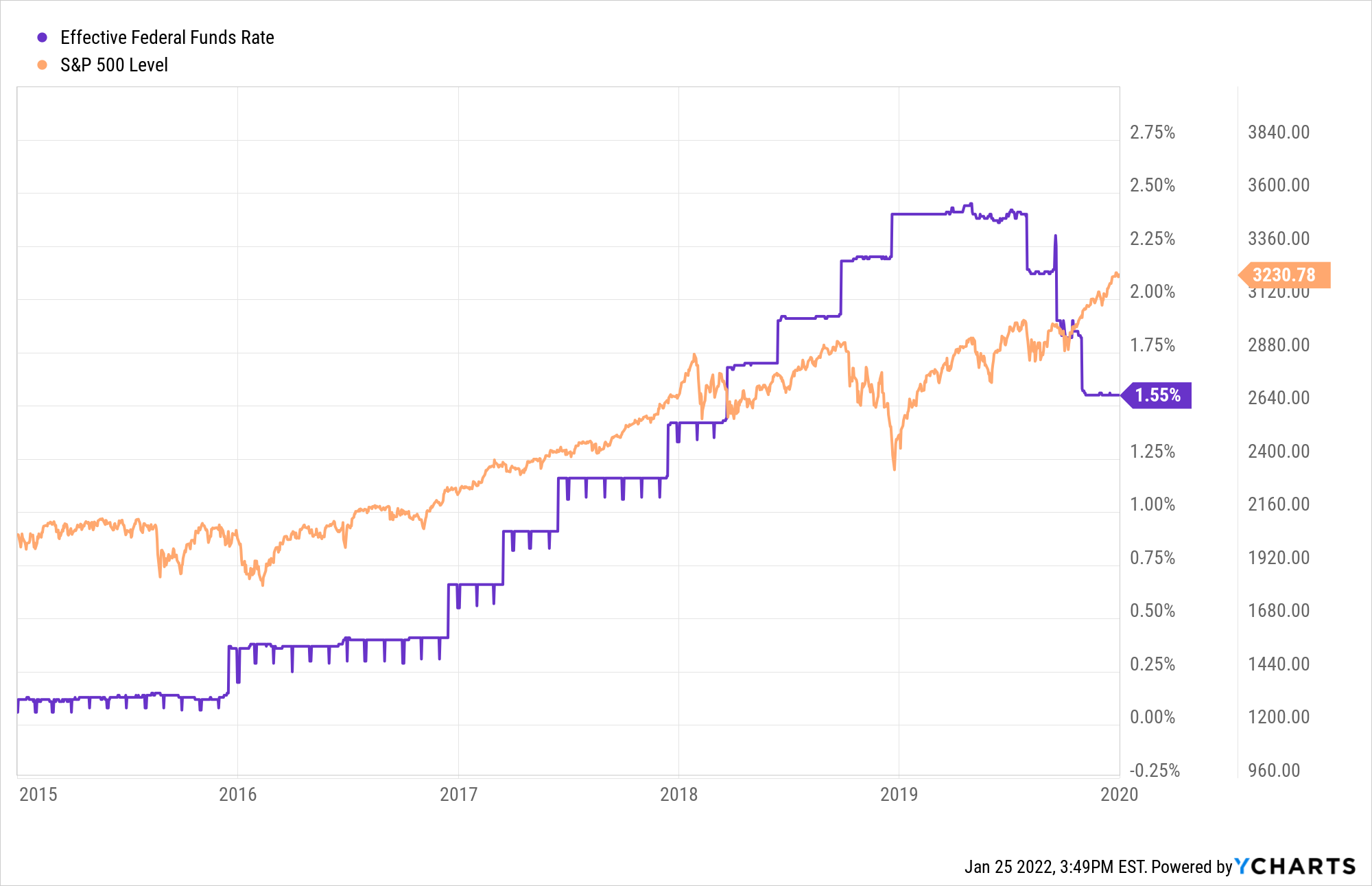 After that point, the Fed stopped raising rates, and eventually lowered rates again in 2019. I saw an interesting comment from David Rosenberg, a strategist with three decades of experience on Bay Street.

Would the Fed actually pause rate hikes while the market has four hikes priced in? Maybe not, but even fewer hikes during the year would indicate they see slowing growth and lower inflation.

In my opinion, the real takeaway here is you want to own businesses with structural growth factors behind them. Sure, you can pick up some percentage points through cyclical equities (ie. banks, energy) if the economy has strong growth, but what if it doesn't? You need companies inside your portfolio to generate growth for you, regardless of how the economy is doing. The managers we use all own businesses with these structural themes.

We have seen a lot of market volatility heading into this week, but you’ve been positive when it comes to the medium term. Why is that?

"We have an upward sloping yield curve and we have credit spreads near the narrows of the cycle. To put that into layman's terms, the interest rate markets and the credit markets are telling us that the probability of a recession within the next 12 months is relatively small. We can never say that it can’t happen, but it's as small as it could possibly be. In the last 50 years, when you have had these conditions, the stock market was 7 to 10% higher 12 months from now. I'm an optimist because, to quote our founder at Dynamic Funds, Ned Goodman: I'm an optimist because I never met a rich pessimist. I am prepared to be pessimistic when the data supports that. But right now, the data supports optimism." 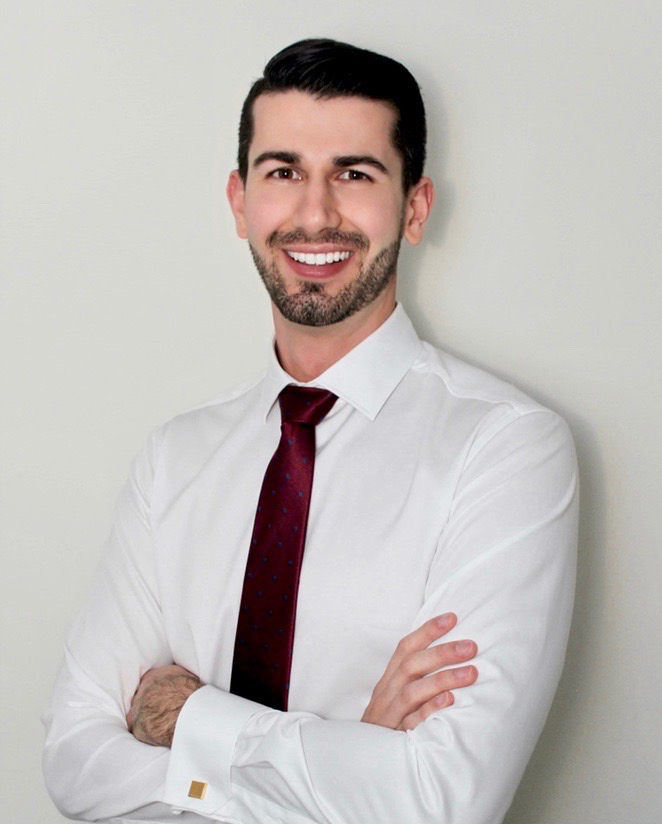